A large scrubbed pine table perched in the centre of an otherwise undistinguished room. It had provided for everyone, the table, from family members to paying bed and breakfast guests.  A six-year-old-girl sat at it, swinging her legs, looking at the ingredients on the back of a ketchup bottle for want of something to read. Underneath the table, a grey half-Persian cat meowed huskily for its milk.

When the girl’s mother approached, there was the smell of perfume, the fanfare of drama, of painted nails, of highlighted hair.  Her mother made everything seem marvellous, everything she touched.  The recipe book sat propped open on the table with its pages stained with the caking of sauce, a cracked cellophane cover resembling ancient lizard scales.  There was the enormous ornate mixing bowl her mother always used, the Kenwood blender; the hypnotic whisk that joined soft clouds of chocolate mixture and egg.  Everything was exciting; there were the different textures her mother played with – rough, crumbling flour to smooth, pliable pastry; pliable pastry to hot, aromatic flan; and it was warm in the kitchen because the oven was always on.  And there would be companionable lick-outs, dark smears on her and her mother’s mouths, like pirates’ beards, she thought.

It didn’t matter what was happening outside the table; domestic arguments, resentments, body dysmorphia, war.  On that table, laid out with the antiquated Kenwood mixer, the freshly rolled-out pastry, was peace, nurture, magic.  The six-year-old girl had left a sticky handprint on one of its corners like a cave painting, as if to say I’ve created something; I am here.

The house was dark, narrow.  It sat off a left turning somewhere in Tufnell Park in a row of houses that all looked the same; a dreary paper-chain of back to backs.  Like all the residents, their front door was unique from any other, in what could only be described as a civil war for pride-of-Englishness individuality.  Theirs was stripped wood – inset with a little beer-glass window, with a protruding bobble that made it look like a breast; and in contrast to next door’s slat of front garden (dominated by a sprinkler that rotated like an enormous peacock’s tail; upstanding, open, proud), a large stone toad crouched rotting; grimacing towards the overcast sky.

At one time if you entered the house via the front door, you might be greeted by the smell of mince, or perhaps of slowly cooking stew, the slightly school dinner-sy tang of cauliflower or brussel-sprouts; yet you were struck at how empty the house was, how utterly devoid it was of human spirit.  The only signs of life were in cupboards, on shelves, in drawers.  In the sitting room there was Eloise’s penchant for collector plates doing battle in the display case with Alex – her husband’s, relatively more recent pursuit of taxidermy; plates of French vintage and Edwardian flowers marshalled stoically among her husband’s collection of deceased owls and stoats.  On the table in the dining room were two sticky wine glass marks, which overlapped like the imprint of a Russian wedding ring.  There was the Edwardian dresser in all its upright glory, housing discarded family silver – The Crown Jewels as Eloise had dubbed it; blackened and tied into knotted supermarket bags.  Everything was covered in dust, a fine layer distributed evenly from the great sieve in the sky.

The bathroom, by contrast, remained sweetly scented with Alpine Mist from a de-smell plug-in, despite the reek of mildew secreted from the carpet toilet seat-cover and mat.  A photograph of Eloise’s parents and Eloise as a young girl hung near the door.  How solemn she looked, a good little girl, and there were her parents’ hands cupped possessively over both of her shoulders, grave smiles as if the whole bloody thing was a chore.  Above the cracked pink basin were Eloise and Alex’s toothbrushes in a fog-stained glass, their plastic necks entwined like a pair of courting swans.  In terms of its high-maintenance hygiene, the brass bedstead in the bedroom gleamed; ting, you could tap it with a spoon.

‘I don’t know how you sleep at night’ Eloise said to her husband.

‘Here we go again’ muttered Alex.  ‘Round and round we go’

They barely spoke to one another these days; they only saw each other in bed.  They still had sex, yet it was a strange, separate sex; a physical necessity that happened out of habit; they turned their backs as soon as it was over.  The same way their meals had become during the first difficult months after Katie was born; each dish of pasta, of pie; a need without desire, a ritual without love.

‘How can you bear to look at yourself in the mirror,’ Alex said to his wife, ‘when your face is smeared with guilt’

She spent her days in the attic.  His, he spent in the cellar through the battered door in the stairs.  She sat kneeling mostly, cross-legged when her knees were tired, sifting through piles of her past; photographs, clothes, old letters sorted into bundles with elastic bands.  It all felt alive; the smell, the earwigs, the worn edges of photographic paper.

Inside the cellar, he paced up and down, sometimes with his hands behind his back, musing over his tools, his wine; the unpacked cases of Chateau Potensac sitting in limbo in the centre of the room; 1982, an investment, a formidable year.

He annoyed her, every little thing.  It had come to that.  The way his shoes peered out from underneath his jeans, the way he rustled his newspaper noisily – as if on purpose.  When she was pregnant with Katie, it had been the way he crunched on his toast, oblivious to her; crunch, crunch, crunch.  He didn’t like the way her skin smelt when she was pregnant, it was reminiscent of the way it smelt when she menstruated; hormones, oestrogen.  And he abhorred the way she treated the paintwork of her car.  She was overly dramatic, a martyr and a nag.  He did not understand her, he couldn’t, never tried.

It did not used to be like that.  He had thought her beautiful, funny, clever.  She with her little shop that sold pastries and antiquarian books.  Her in that apron of hers that he found quite sexy, looking over her black-rimmed glasses as she explained to a customer the history of one of the books.  She had given it up when Katie was born; had swapped the cakes for carrot and butternut squash puree, the books for ones that rattled and squeaked.  Her hands became the hands of a much older woman; her nail polish peeling and chipped, detergent abraded hands.

‘Why don’t you do your nails?’ he said to her once.  ‘There are bits of nail varnish floating in the washing-up water.  It’s nasty’

‘Why don’t you ever help do the washing up then? You don’t lift a bloody finger’ she said.

Katie crawled under their feet, playing with Alex’s shoe-laces, raising her tiny arms so that Eloise might know she wanted to be picked up.

And then Katie was killed.  Her pink nursery abandoned, bereft.  And for a while, Eloise and Alex – they stood by one another, supporting each other in their grief.  They cried together, shared happier memories, held hands again like when they were first in love.  But when more time had passed and they were more able to think, ultimately the blame set in.

‘You weren’t looking where you were going’ he said.  ‘You were too busy fiddling around in your handbag for that packet of chewing gum.  You weren’t watching the road’

‘She wouldn’t have died if you’d fixed the baby seat properly’ Eloise told him.  ‘She’d still be here if the seat had held her in.

His mind had been on something else, if the truth be told.  They were going on holiday, driving to the airport; he had to make one last business telephone call on their way there, he had rushed the fixing of the baby seat.  He had needed to make that call, the investment company where he worked in the City depended on it.  Yet she was driving, fiddling in her handbag when she should have been watching the road, it was her fault.

Round and round they went, always the same conversation, the same words; perhaps it would never end; she courting her past in her attic, him seeking solace in the cellar; the permanence of his tools, the reliability of his wine bottles.  She sorted through her old clothes, a pile ready for the charity shop.  She emptied three refuse sacks of Katie’s things, only to put them back again.  They saw one other less and less, Eloise and Alex; the dust on the furniture and kitchen appliances building up like snow, the stale bread in the bread bin, dark inky mould.  If they so much as touched, their bodies dissolved like ash.

It did not matter whose fault it was, the outcome was still the same.  It made no difference if it was the chewing gum or the car seat.  Just before Katie died, Eloise still had to be lifted through what had been left of the windscreen, and even then, nothing could save her.  And Alex, he had been killed with that first impact of the other car – a drunk driver coming from nowhere on the wrong side of the road. 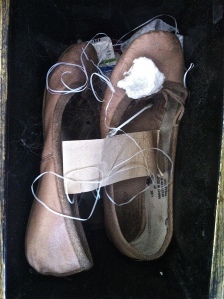